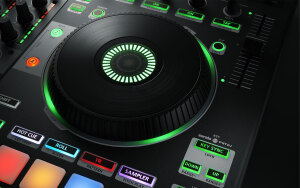 At an early age, Nyron accepted Christ as his Savior under the leadership of Dr. R.E. Price, Sr. at New Mt. Zion Baptist Church in Dallas, Texas. He graduated from Lake Highlands High School (class of 2000) in Dallas and went on to attend Prairie View A&M University and the University of Texas in Arlington (UTA) where he studied forensic science. His career path changed and led him to his new found love of banking. He began working at Neighborhood Credit Union in 2006 and continued to learn and grow with the organization; he matriculated through the ranks as Bank Teller, Loan Officer, and Branch Manager.

Nyron developed a love for the game of basketball at an early age. His love and impressive athletic skills allowed him to play for various teams from elementary until he graduated from high school. He was also a beast of the 1’s and 2’s. His love for music had him deejaying celebrations for friends and family at a young age as well. This love later blossomed into an amazing side career. The experiences allowed beautiful memories to be etched in his heart for all the many fans, friends, and celebrities that crossed his path. Known for his kind heart, generosity, and his authentic, down-to-earth spirit. Nyron left this world in such a way that those of us left behind can only wonder at the magnitude of love he left for us to cherish.

He will forever be cherished and remembered by his love, TiLisa Hurd; his mother, Wilma Harding; his father, Larry Harding; his brothers, Roderick Walker and JaMar Harding (Angela); his sister, Keisha Harding; his nieces: Kennedy, Kanisius, and Koshiya; and his nephews, Shamar and Taylin. He also leaves TiLisa’s son, Tra Johnson, and his children, Torrei and Tracin; TiLisa's daughter, Natasja Bagley; a host of aunts, uncles, and cousins; ‘his bros from another mother’ - Brandon Sneed, Steve Richardson, Jacar Bray, Kris Evans, and Kevin Carter; and other close friends who loved him deeply. He touched the lives of more people than he would ever know, and his presence on earth will be dearly missed.

Viewing
Saturday
May 30, 2020
2:00 PM to 6:00 PM
Chamberland Funerals & Cremations
333 West Avenue D
Garland, TX 75040
Graveside Service
Tuesday
June 2, 2020
12:00 PM
Jackson Grove Cemetery
225th East Avenue
Coweta, OK 74429
Please note
Due to the COVID-19 pandemic, a graveside service will be held to accommodate all that wish to join in the celebration of Nyron's life. Thank you for understanding, and your prayers are greatly appreciated. Nyron's graveside celebration in Oklahoma is under the care of Keith D. Biglow Funeral Directors.
Share a memory
© 2020 Chamberland Funerals & Cremations. All Rights Reserved. Funeral Home website by CFS & TA